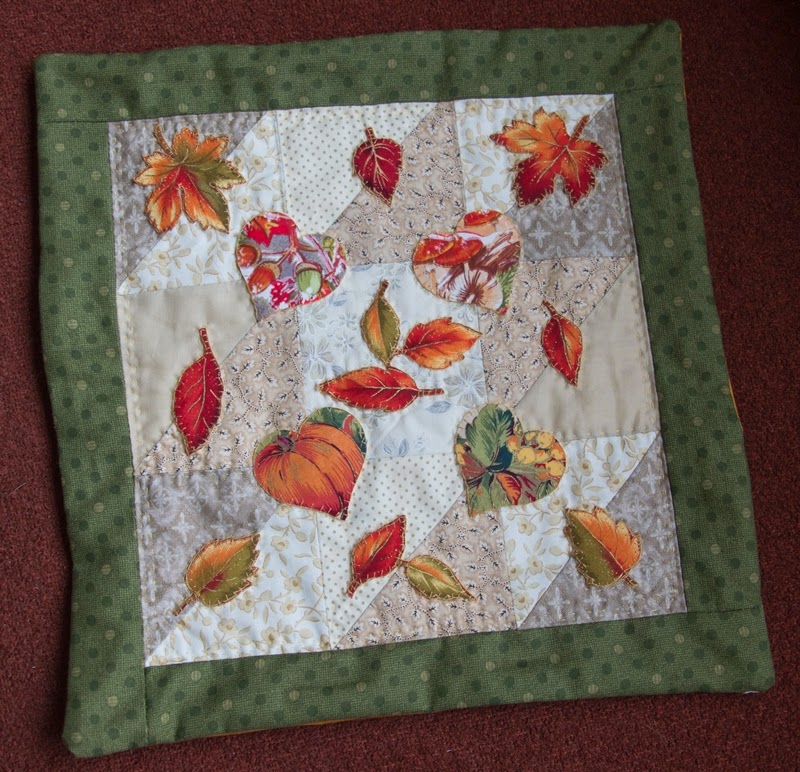 October 2013 – I made a mini table top for the occasion of my friend’s birthday: she is a nature lover, runs her own B&B, and  lives almost in the street around the corner. She did not have any wishes for her birthday, other than hiking with friends for charity – to collect money for the Dutch Cancer Society. But I could not resist to make a her a little table-runner in Autumn-style.

I was so lucky to be able to make a trip to the USA in October, and visit with my friends Kathy and Jon prior to the NMDP Council Meeting. We had such a great time together, did some hiking and sight seeing (We drove  to Stillwater, the Birthplace of Minnesota), a lot of shopping (fun!), pedi’s and mani’s, and she organized a ‘fabric-shop-hop’ in and around Minneapolis for me. Load’s of new fabric and idea’s to bring home with me. We will definitely do that again!

November 2013 was a special month, a month to remember. The weekend exhibition of the KadK– group was planned for November 22-23-24, all art works were based on   the theme ‘Music’. I borrowed the “My Rhapsody in Blue’ quilt that I made for Florian earlier this year, and made two new small wall-hangings.

‘Falalala’ is patchwork and application, hand quilted, showing  a children’s choir. It was fun to make. And…it was sold!

The second work was more traditional with bricks in blue, and a bunch of small old keys attached to a number of bricks. It is named ‘Music is the key’ and is hanging in my office since the exhibition.

The month ended with a special day, a memorable moment, we have been looking forward to: the graduation of my youngest daughter Leonore.  Since November 29th, she is officially MD. She started working in the pediatrics department as of January 2014, and I feel very grateful! We had a nice party, celebrating her gradutation and my 55th birthday with friends and family.